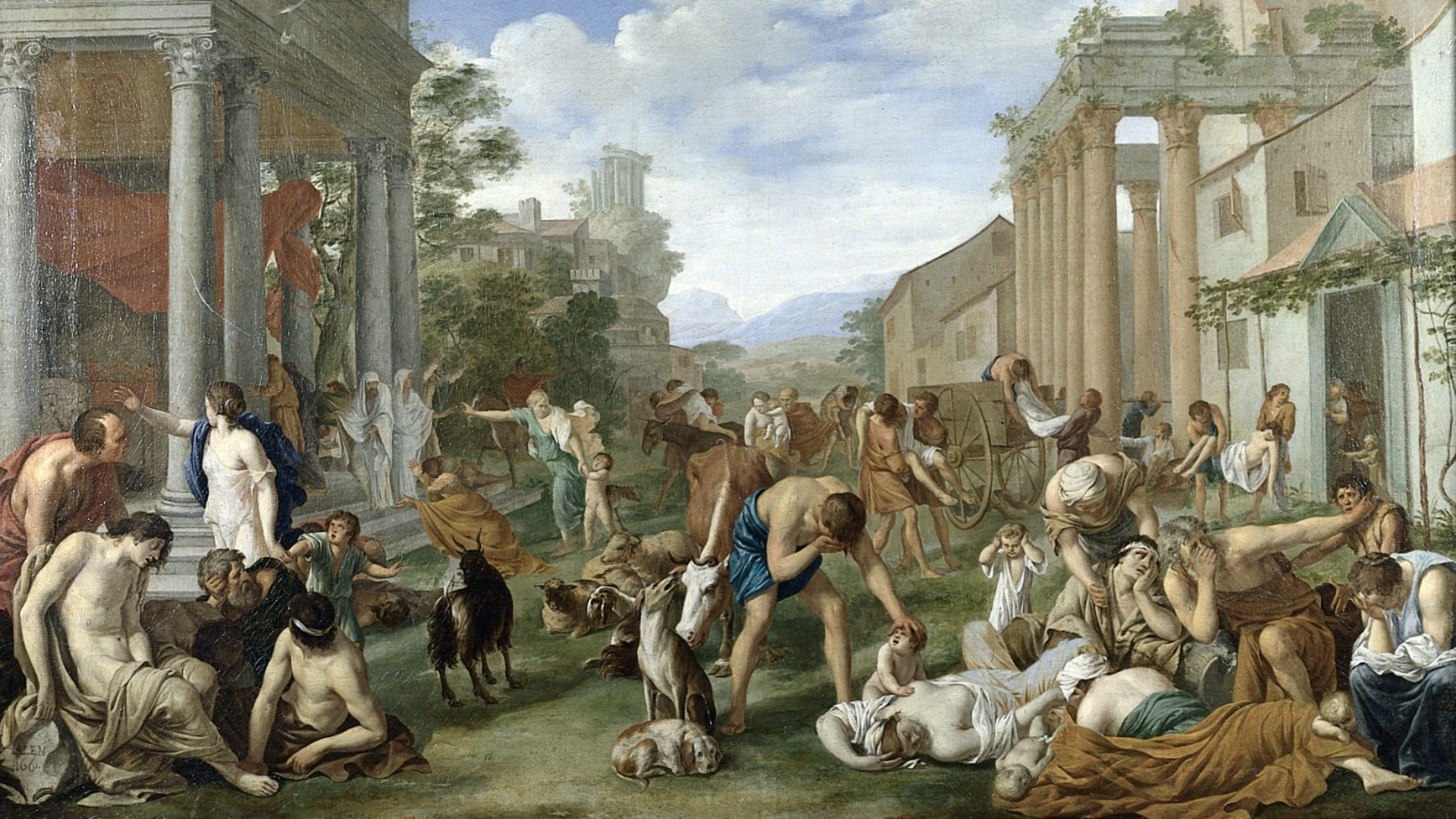 Antonine: The Plague of Galen And The Fall of Rome

Antonine: The Plague of Galen And The Fall of Rome – The Antonine Plague, sometimes referred to as the Plague of Galen, erupted in 165 CE, at the height of Roman power throughout the Mediterranean world during the reign of the last of the Five Good Emperors, Marcus Aurelius Antoninus (161-180 CE).

The first phase of the outbreak would last until 180 CE affecting the entirety of the Roman Empire, while a second outbreak occurred in 251-266 CE, compounding the effects of the earlier outbreak.

It has been suggested by some historians that the plague represents a useful starting point for understanding the beginning of the decline of the Roman Empire in the West but also the underpinning to its ultimate fall.

Galen (129 – c. 216 CE), a Greek physician and author of Methodus Medendi, not only witnessed the outbreak but described its symptoms and course. Among the more common symptoms were fever, diarrhea, vomiting, thirstiness, swollen throat, and coughing.

The coughing produced a foul odor on the breath and an exanthema, skin eruptions or rash, over the entirety of the body distinguished by red and black papules or eruptions:

Those infected suffered from the illness for roughly two weeks. Not all who caught the disease died, and those who survived developed immunity from further outbreaks. Based on Galen’s description, modern researchers have concluded that the disease affecting the empire was most likely smallpox.

Cause & Spread of the Disease

The epidemic most likely emerged in China shortly before 166 CE spreading westward along the Silk Road and by trading ships headed for Rome. Sometime between late 165 to early 166 CE, the Roman military came into contact with the disease during the siege of Seleucia (a major city on the Tigris River).

Troops returning from the wars in the East spread the disease northward to Gaul and among troops stationed along the Rhine River.

Two different legends arose discussing the exact origins of how the plague was released into the human population. In the first story, the Roman general, and later co-emperor, Lucius Verus opened a closed tomb in Seleucia during the subsequent sacking of the city thus releasing the disease.

The tale suggests that the epidemic was a punishment as the Romans violated an oath to the gods not to pillage the city. In the second story, a Roman soldier opened a golden casket in the temple of Apollo in Babylon allowing the plague to escape.

Two different 4th-century CE sources, Res Gestae by Ammianus Marcellinus (c. 330-391 – 400 CE) and the biographies of Lucius Verus & Marcus Aurelius, ascribe the outbreak to participating in a sacrilege, violating the sanctuary of a god and breaking the oath. Other Romans blamed Christians for making the gods angry precipitating the outbreak.

There is much ongoing debate amongst scholars regarding the effects and consequences of the epidemic on the Roman Empire. This debate is focused on the methodology used to compute the actual number of people who died. The Roman historian Dio Cassius (155-235 CE) estimated 2,000 deaths per day in Rome at the height of the outbreak.

In the second outbreak, the estimate of the rate of death was much higher, upwards of 5,000 per day. It is most probable that the extreme death toll was due to this disease exposure being new to people living around the Mediterranean.

Mortality rises when infectious diseases are introduced into a ‘virgin population’, that is a population which lacks acquired or inherited immunity to a specific disease. All told it has been suggested that a quarter to a third of the entire population perished, estimated at 60-70 million throughout the empire.

What is undisputed is that Lucius Verus, co-emperor with Marcus Aurelius, died from the illness in 169 CE; Marcus Aurelius died 11 years later from the same illness. Ironically, it was Verus’ soldiers who contributed to spreading the disease from the Near East to the rest of the empire.

At the outbreak of the plague, Rome’s military consisted of 28 legions totaling approximately 150,000 men. The legions were well-trained, well-armed, and well-prepared, none of which prevented them from catching the disease, falling ill, and dying.

Regardless of their posts, the legionaries contracted the disease from fellow soldiers who had been on leave returning to active duty. The ill and dying caused manpower shortages especially along the German frontiers thus weakening the Romans’ abilities to defend the empire.

The lack of available soldiers caused Marcus Aurelius to recruit any able-bodied man who could fight: freed slaves, Germans, criminals, and gladiators. Depleting the supply of gladiators resulted in fewer games at home, which upset the Roman people who demanded more, not less, entertainment during a time of intense stress.

The patchwork army failed in its duty: in 167 CE, Germanic tribes crossed the Rhine River for the first time in more than 200 years. The success of the external attacks, especially by the Germans, facilitated the decline of the Roman military, which, along with the economic disruptions, contributed ultimately to the decline and fall of the Empire.

In more general terms, the horrific death toll reduced the number of taxpayers, recruits for the army, candidates for public office, businessmen, and farmers. At a time of increasing expenses for maintaining the empire and the necessary military forces to ensure the empire’s security, government revenues declined.

The decrease in tax revenues was attributable to less production on the farms as fewer farmers meant too much land left uncultivated. The scarcity of crops caused steep price increases along with decreasing food supplies. The plague’s effect on the economy was not limited to the agricultural sector.

Fewer craftsmen meant fewer things being made which stymied local economies. The shortage of workforce also led to higher wages for those who survived the epidemic and the lack of businessmen, merchants, traders, and financiers caused profound interruptions in domestic and international trade.

All of these downturns meant fewer taxes for the state, which was already sorely pressed to meet its financial obligations.