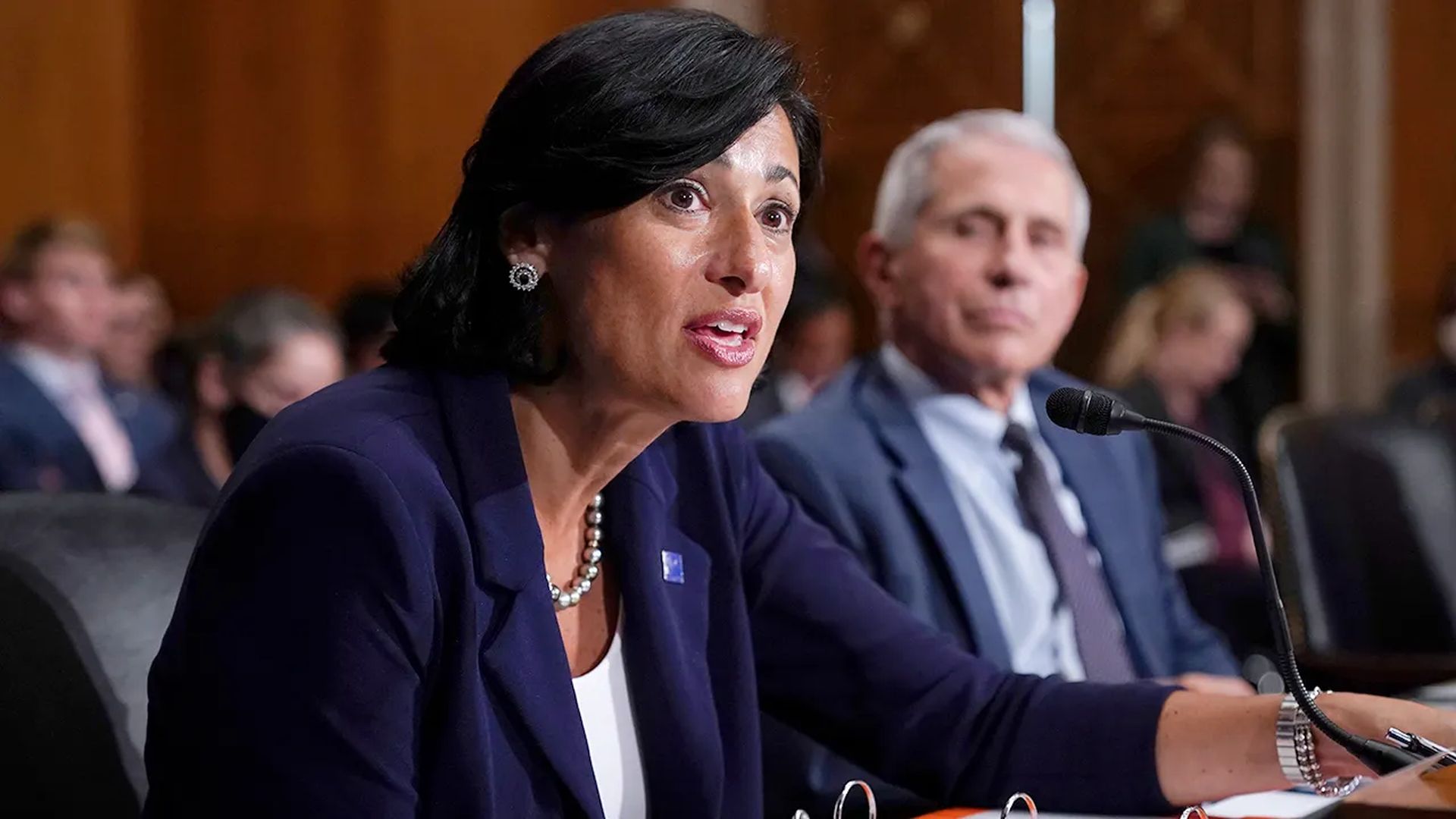 Vanquishing disease is in the DNA of the Centers for Disease Control and Prevention, the federal agency that in its first decade of existence oversaw the eradication of smallpox, the elimination of malaria and the stamping out of polio as threats to Americans’ health.

But as the director of the 75-year-old agency acknowledged this week, the CDC hasn’t evolved to keep up with the faster speed and higher stakes of germs in the modern world.

In the face of a historic threat — the emergence of a novel virus that has killed more than 1 million Americans — “our performance did not reliably meet expectations,” Dr. Rochelle Walensky told CDC employees in a bracing call for change.

The arrival of monkeypox has already brought the agency’s creaky machinery in for further criticism.

Failure to improve could spell extinction for a public health organization that has long been a model for the world, experts said.

Many of those experts have spent much of the COVID-19 pandemic barely suppressing their dismay at the agency’s faltering efforts to move beyond its early missteps and regain Americans’ trust and confidence.

“A botched response to the greatest crisis of our lifetime,” said Lawrence Gostin, an authority on public health law at Georgetown.

A record of miscues that resulted in “one of biggest losses during this pandemic: trust in our public health agency,” said Dr. Richard Besser, a former CDC director who is now president and CEO of the Robert Wood Johnson Foundation.

“A culture that was simply arrogant and overestimated their ability to get it right,” said Kathleen Hall Jamieson, director of the University of Pennsylvania’s Annenberg Public Policy Center and an expert on science communication.

As the coronavirus swept across the globe, the agency’s renowned specialists bumbled an early test to detect it. They issued wrong and confusing guidance on the value of face-coverings.

They took months to acknowledge what outside scientists quickly gleaned — that the virus that causes COVID-19 was spreading mainly through the air.

And they relied on epidemiological findings from Israel, Europe and South Africa instead of U.S. data that was often difficult to wrest from a patchwork of overwhelmed public health departments answerable to state politicians.

CDC pronouncements on basic stuff — how long an infected person should isolate, who needed vaccines and boosters most urgently, how long immunity would last, and what should come next — have been late, garbled and subject to caveats that are unintelligible to ordinary Americans.

When new findings demanded updates to earlier guidance, they dribbled into the news cycle fitfully and without context.

“To be frank, we are responsible for some pretty dramatic, pretty public mistakes,” Walensky said in a video circulated to the agency’s 11,000 employees. “We still suffer the consequences of these mistakes — from testing to data to communications.”

Neither the virus’ novelty nor political meddling can absolve the CDC of blunders made well into the pandemic’s second and third years, she added.

“An honest and unbiased read of our recent history will yield the same conclusion,” she said. “It is time for CDC to change.”

Walensky’s sobering admissions followed a comprehensive review based on interviews with roughly 120 public health experts from inside and outside the agency.

In meetings with senior advisers and public health leaders she got an earful about a culture of scientific self-absorption that hobbled the agency’s central mission of public messaging.

The CDC’s epidemiologists, she was told, have acted with all the scientific conservatism and urgency of an academic medical journal.

“By the time they finished, the data might have been bulletproof,” said one senior CDC official who was not authorized to speak to the press. “But its actual relevance had passed.”

The CDC’s risk communication mission is supposed to embody three commands: Be first. Be Right. Be Credible.

“Yet we saw during COVID that CDC was not first, and often lagged by a significant period of time behind other sources of information — and of misinformation,” Besser said.

Walensky’s first priority is to improve the CDC’s ability to convey scientific knowledge about a health threat early, often and authoritatively, especially to Americans who need it to protect themselves and their communities.

“No one can say their messages have been up-to-date, comprehensible, timely and calm,” Gostin said. “They always seemed to be leading from behind.”

To a deeply divided public, the CDC’s changing guidance was often interpreted as a lack of conviction or worse, dishonest manipulation.

Many chose easier and more frequently updated sources for their pandemic information.

But even scientists and public health experts — people who appreciated the scientific complexity of the CDC’s task — gave up on the agency’s leadership, Gostin said.

Walensky will try to win them back with a raft of proposals to modernize the agency.

The initiatives aim to strengthen the agency’s workforce and its partnerships with healthcare organizations and state and county public health agencies.

They would streamline data collection and the sharing of CDC science.

They would make the agency’s public health messaging faster and easier to understand when time is of the essence.

And to avoid the kinds of governmental cross-talk that often made CDC look clueless, a “no-surprises posture” would become a key operating principle of the agency’s communications.

Some changes, including the flexibility to shift funds in an emergency, will require congressional approval, a process that has already begun.

Others, including the establishment of a new office of public communications and an agency-wide focus on diversity, equity and inclusion, have just been snapped into place.

And then there’s the task of nurturing a habit of nimbleness.

“Yes, we are going to be moving some boxes around on the org chart,” Walensky told CDC employees.

“However, I cannot stress enough that moving boxes around will not modernize this agency or prepare us better for the next pandemic. Changing culture will.”

To be sure, the legal, budgetary and political strictures under which the CDC has operated will continue to pose major challenges, Gostin said.

For decades before COVID-19 appeared, steady funding declines hollowed out the corps of public health workers at the county, state, tribal and federal levels.

Dwindling budgets dried up the kind of lab capacity needed in a sudden outbreak and stunted the introduction of new ways to monitor the public’s health, from genetic sequencing of viral specimens to wastewater surveillance.

While the pandemic has underscored that those methods are here to stay, the CDC still needs money to build up its lab capacity and a workforce capable of practicing 21st-century epidemiology.

After the billions spent on the pandemic, that could be a hard sell to a wary Congress, Gostin said.

The CDC also needs to find more effective ways to command data on new health threats, Gostin said. State and local governments — not a federal agency like the CDC — are responsible for carrying out and enforcing measures to protect the public’s health.

A federal judge’s order this spring demonstrated that the CDC doesn’t even have the unquestioned power to require that masks be worn on planes, trains and other forms of public transportation.

Nor, under the Supreme Court’s reading of the 10th Amendment, can the CDC compel state or county health departments to collect and share data of public health interest if they don’t wish to.

That has handicapped the CDC’s pandemic response. At various points, a wide range of states, including Florida and Texas, simply did not provide data on COVID-19 cases, vaccinations and deaths, leaving the federal agency to guess at the missing numbers or make their calculations without them.

If the CDC is to avoid such blind spots in a future emergency, it will have to create surveillance systems by lashing together healthcare systems and willing states and counties, as it’s done to keep tabs on influenza. And it will need to act fast.

Lorien Abroms, who teaches public health communications strategy at George Washington University, is optimistic that the CDC can overcome its record of pandemic mistakes.

“Sure they can reform themselves,” she said. “They came from a place of greatness. We used to lead the world on epidemiological intelligence. I definitely think we can go back to that.”