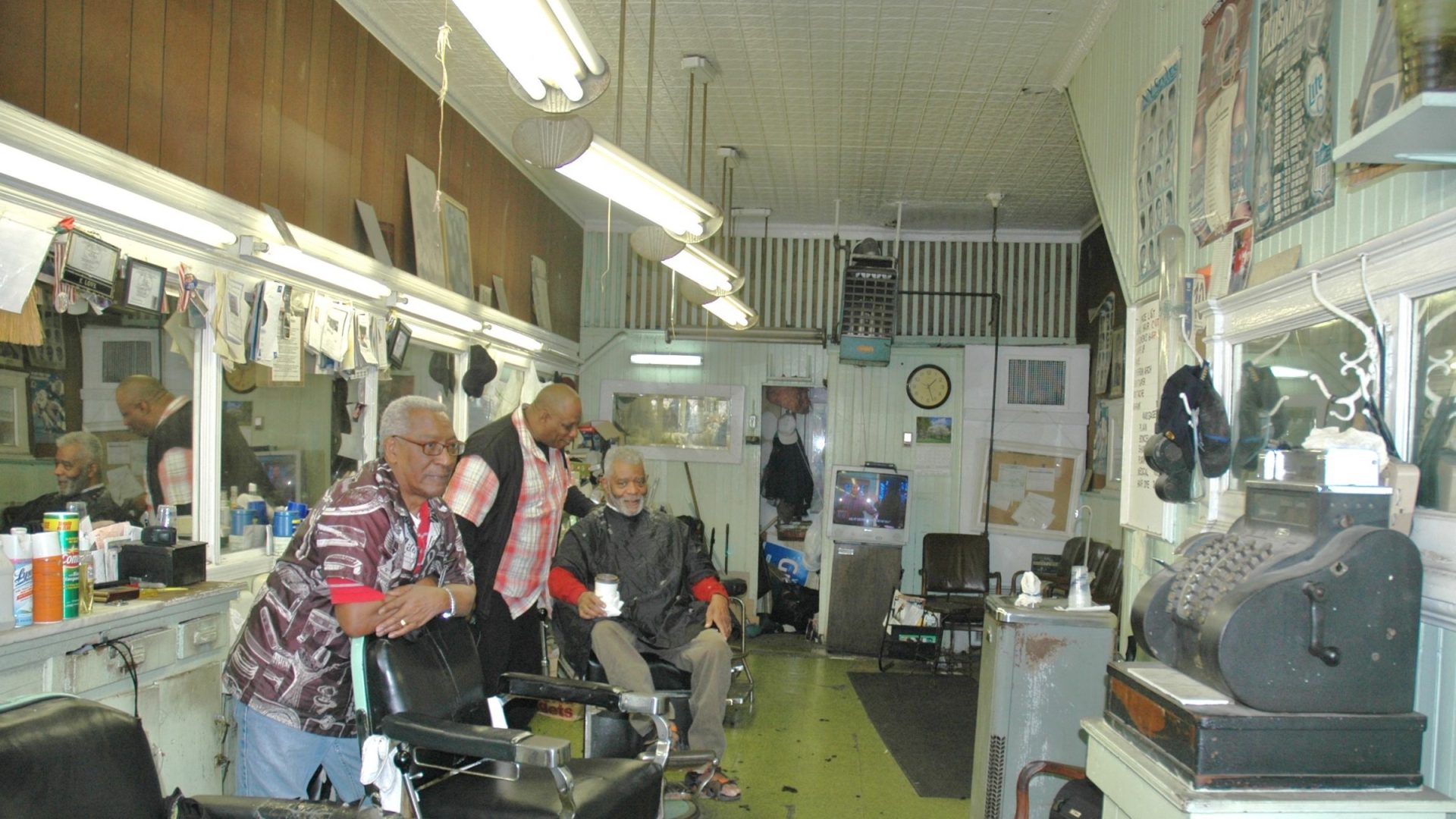 A Farewell To Frank Love A Pillar Of The Community

A Farewell To Frank Love A Pillar Of The Community: As he cut her hair when she was a teenager, Frank Love would remind Christine Coghill to do her homework.

In her 30s, he assured her that she could overcome her addiction to crack cocaine. Years later, after she had raised two boys and straightened her life out, he cut her grandson’s hair in the same black leather chair where she had sat.

“Mr. Love would never talk down to me,” said Coghill, now 63, a medical assistant at the United Medical Center. “He never said, ‘Shame on you.’ He never scorned me. He told me I could get better.”

A city’s culture is often embodied by its elected leaders, the famous names who command the civic stage.

But there are also the lesser-known characters who shape the rhythms of the day-to-day — the merchants and bartenders and barbers whose familiar faces help define neighborhood life.

Until his death last month from prostate cancer at the age of 86, Frank Love had cut hair at Gregg’s Barbershop since 1961.

It included riots that tore the neighborhood apart and a renaissance that made those same streets hard to recognize.

Love cut hair as Martin Luther King Jr. delivered his “I Have a Dream” speech and Kennedy lay in state, and as President Richard Nixon resigned and President Barack Obama was sworn in.

He was also there for a more intimate kind of history — a boy’s first haircut, or a man’s last.

Taped to the mirror behind his barber’s chair were the memorial programs for patrons who had died — men from the neighborhood and beyond with nicknames such as “Catman,” “Sugar Foot” and “Billy Blue.”

In the late 1990s, Love became the shop’s owner, a change that had no outward effect on his quiet and gentle manner. The antique cash register stayed where it was.

The rendering of heavyweight champions — Muhammad Ali and Joe Louis among them — remained on the wall.

As always, Love was behind his chair by 9 o’clock each morning, saying “next” when he was ready for another customer.

“I talked to him about everything — sports, weather, whatever was going on,” said Wayne Johnson, 51, who got his first haircut from Love when he was 10.

“He cut everyone’s hair,” Johnson said. “Everybody knew him.”

Horace was vivacious; Vi kept him grounded. After nearly 75 years of marriage, covid-19 took them both.

‘There was no judgment’

Love’s death is another pang for a neighborhood where shops and restaurants are already reeling from the shutdown caused by the novel coronavirus.

Gennaro Ballard, a barber who worked with Love, had hoped to keep the business open.

But he said the landlord would not renew the lease, a decision that apparently ends what Shaw Main Streets, a neighborhood group, says were 110 consecutive years of haircuts at the same address.

Stella Johnson, the property’s owner, could not be reached for comment.

Billy Greer, 57, a police officer at the University of the District of Columbia, first met Love in 1987 when a friend took him for a haircut.

He became a regular, enthralled by the ensemble cast the shop attracted: the barber known as “Hook and Crook,” who would slip out to buy $200 in lottery tickets and come back with winners.

The customer nicknamed “Ritz” for eating only Ritz crackers as he waited his turn; and “Grady the Gambler,” who, even on the far side of middle age, would show up after playing cards all night and fall asleep until Love summoned him.

“Mr. Love would tell him, ‘Look, you’re almost 70 years old. You got to get proper rest, you got to quit smoking; you can’t keep this up,’ ” Greer recalled.

Love urged Greer to finish college so he “wouldn’t miss any ships” — the barber’s shorthand for squandered opportunities.

Over the years, Gregg’s was frequented mostly by men, virtually everyone Black, a mix of students, police officers, doctors, construction workers, retirees and sometimes those who were struggling.

If they got to cursing during Coghill’s visits, Love would remind them that a young lady was present. “Mr. Love,” she said, “was like the father I didn’t have.”

During those years when she was smoking crack, she would tell him that she was going “around the corner,” and he suspected the worst. “

‘Do you really need to go there?’ ” he would say, she recalled. “He’d tell me I needed to be around positive people.”

She ended up accompanying a friend to an AA meeting, which began her recovery, a transformation she talked about when she visited the shop.

Her experience made an impression on another customer, Cedric Carter, 61, a heroin addict who had been going to Love for haircuts since he was 9.

“Mr. Love was someone I could share my darkest secrets with,” Carter said. “When I heard Christine, it planted a seed of hope in me.

She’d talk about how she had gotten clean. Now, here it is, 16 years later, and I’m clean.”

Carter, now a counselor at a drug rehabilitation center, said Love treated the addicts who sometimes congregated outside the shop with respect.

On the Saturdays before Easter, he was known to give free haircuts to kids whose families were struggling, or offer credit to those who promised to pay later.

“There was no judgment,” Carter said.

Love understood poverty’s grind, having grown up in a small town in South Carolina, the son of sharecroppers.

After three years in the Air Force and then college, he migrated to the District, where he got a job at Gregg’s.

At the time, Shaw was a center of Black life in Washington, home to the Howard Theatre, which featured stars such as Lena Horne, James Brown and Jackie Wilson.

Love took Pearl Welch to see Wilson perform when they were dating — before she became his wife of 55 years.

In the hours after King’s assassination in 1968, the rioting and looting that began at 14th and U streets NW spread to Seventh Street.

Love and other shopkeepers spray-painted “Soul Brother” on wooden boards that they used to barricade their windows.

When Antonio Johnson, a photographer, wandered into Gregg’s 50 years later, Love told him that moment during the riots was among his most enduring memories.

“He said it worked; his business did not get destroyed,” said Johnson, who included a portrait of Love in his recently published book on Black barbershops.

It took decades for the neighborhood to recover. Love refused opportunities to relocate, even after a gunman walked into the shop one afternoon in 1988 and killed a 22-year-old man waiting for a haircut.

Yet Love’s affection for the neighborhood was not without limits. He was exasperated when a burglar broke into the shop. “That broke his heart,” Greer said.

“The barbershop had been there for so long, and he had helped people who didn’t have anything. He’d say, ‘Why would they break in here?’ ”

The Howard Theatre closed in 1970, and, aside from occasional performances, remained a dilapidated reminder of a glorious past for the next four decades.

When it was renovated and reopened in 2012, the theater symbolized Shaw’s rejuvenation, along with new restaurants, luxury housing and an influx of more prosperous residents.

By then, Love was a venerable voice for a bygone era, quoted by reporters chronicling the neighborhood’s evolution. But he also embraced the changes, telling friends he liked when White residents new to the neighborhood came into the shop.

He waved off his wife and children when they encouraged him to retire. Maybe next year, he would say as each year passed.

In early August, Greer went for his usual haircut and found Love and his wife gathering up his belongings. Love told him he would not be cutting his hair that day and was on his way home.

He seemed to want to say something more, but he was silent. He leaned in for a hug and then walked out the door.